You are here: Home / Archives for fire safety

I’ve created an “F is for Fire Coloring Page” to go along with our Fire Safety lessons. When we’re learning about topics like fire safety, I like to incorporate letters since children are more likely to make a connection to a specific word or object. I’m always looking for ways to incorporate letter recognition.

F is for Fire

We painted our pages with tempera paint and Q-Tips. You can certainly just color the page, or just paintbrushes. Try fork painting flames too.

The paint colors mix together to make a multi-colored flame. Some kids just painted the letters and the littler ones painted all over their page, making it look like flames.

Using a Q-tip to paint incorporates a bit of process art.

Read about the Value of Both Product and Process Art

Make a list of words that start with Ff. Find some books for Fire Safety. Start a preschool alphabet book.

F is for Fire Coloring and Painting PageDownload

The F is for Fire Coloring page is appropriate for toddlers and preschoolers. 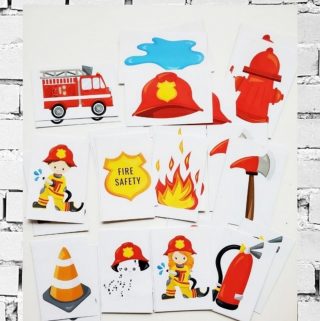 It’s October so that means fire safety month. Kids love to learn about fire trucks and firefighters! Extend your theme with a game of matching or memory with these free fire safety matching cards.

Simply print, cut, and play with the matching or memory cards. I printed mine on photo paper, laminated them, and then cut them apart so they last longer.

You can also make this game more challenging by using them as a memory game for children who are ready. Or hide one set of cards around the room for a more active matching game! 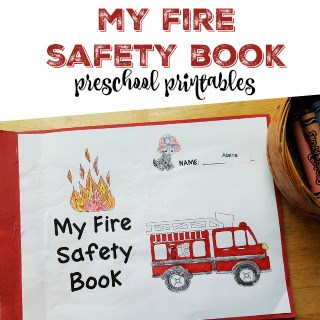 Years ago I made fire safety books with my preschoolers but at the time I really wasn’t sharing anything more than the idea. Since then, I’ve had lots of requests for the pages of the fire safety book. I finally created all new Preschool Fire Safety Booklet Printables! If you are working on a certain skill or idea, you can print just one page or you can print them all and make a book for a fire safety week activity.

All of these pages are included:

See  a few of the completed pages below:

Below are a preview of all the pages. 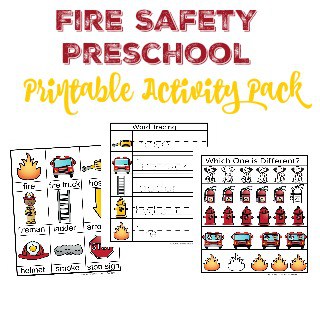 In October we observe fire safety and fire prevention through activities for preschoolers. It’s important to teach children health and safety topics like what’s hot, what not to touch, what to do if there’s a fire, and to never play with fire.  Fire Prevention Day is always celebrated on October 9th. It’s an important topic to address throughout the year with fire drills and safety lessons. Here’s a Fire Safety Preschool Activity Pack that’s ideal for preschoolers-1st graders. 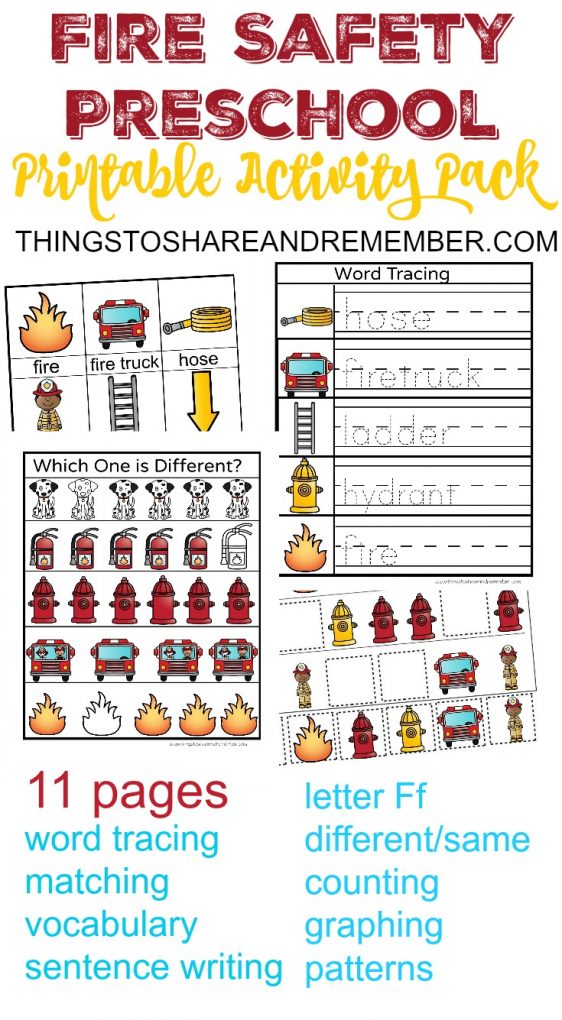 Eleven pages are included, covering these skills and topics: 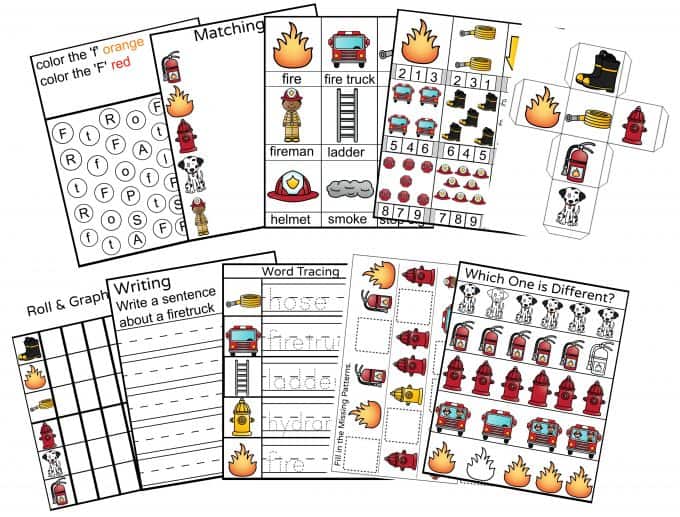 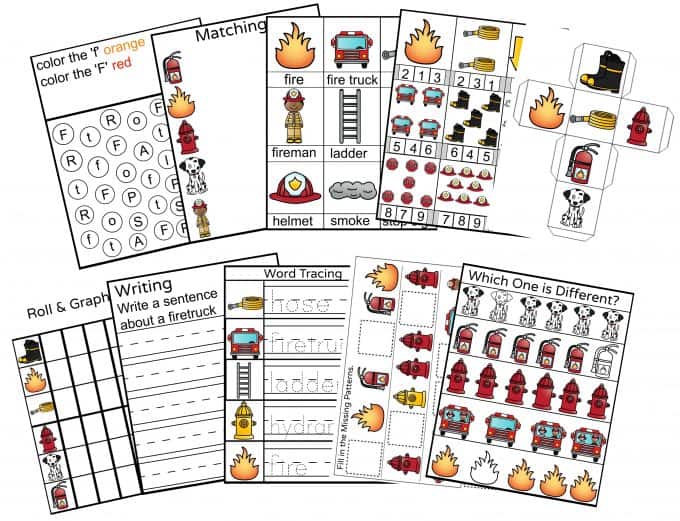 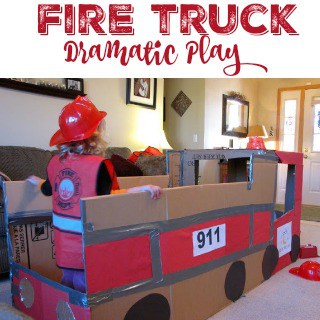 For Fire Prevention month, I made a fire truck for Fire Truck Dramatic Play. What better way to learn about fire safety than through play? Dramatic play makes learning real because the kids get to explore on their own, try out roles and use their imagination. 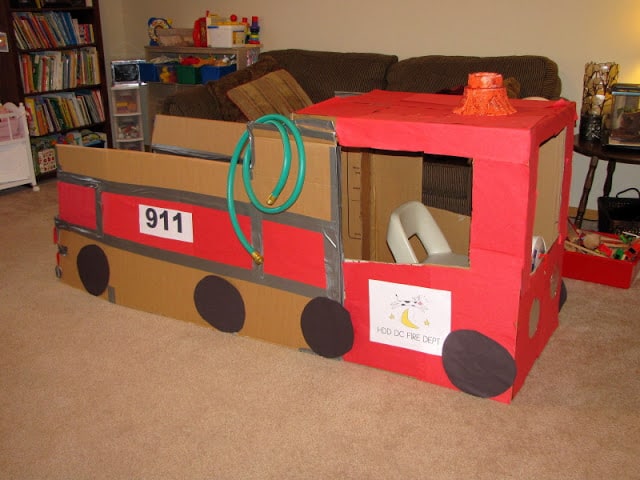 I made out of big boxes for the kids to play in.  I finally got it done just before Fire Prevention Month ends! 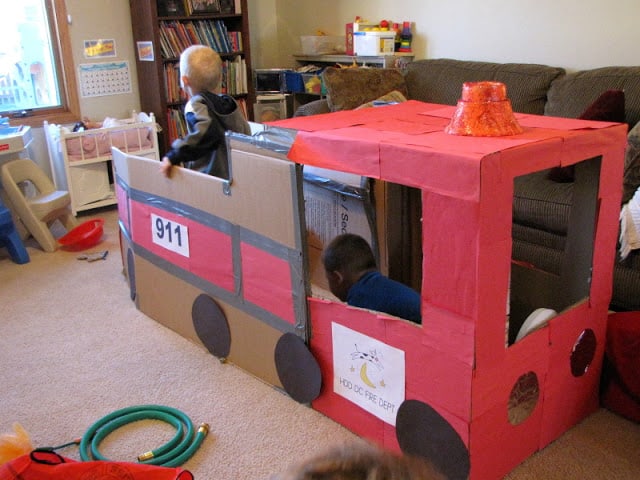 It took me two hours to get the two boxes cut, piece it together, and decorate it. Fun! I didn’t tell the kids I was going to make it so they were very excited to arrive and find a firemen’s hat in their cubby! 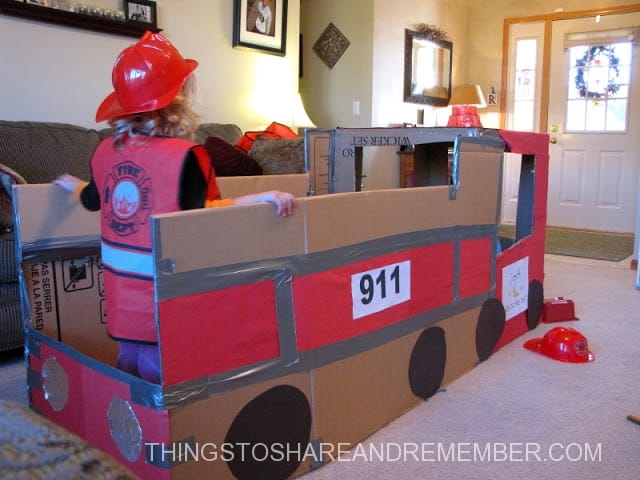 It’s been played in non-stop the last two days and I’m sure it will be again tomorrow. The water hose is probably the most important accessory. The kids have played and played with it. 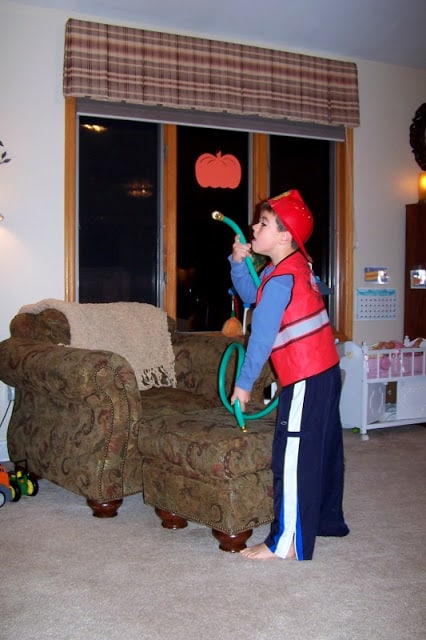 Making the fire truck was so fun, and it really came together after I got started. I wasn’t sure exactly how it would turn out but just kept making it as I went along. Don’t be afraid to try something new! It might just turn out great! 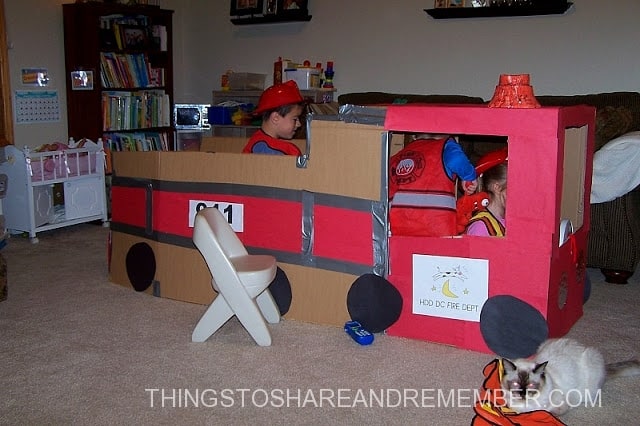 It’s made entirely out of cardboard, duct tape, colored paper, foil and other recycled materials. 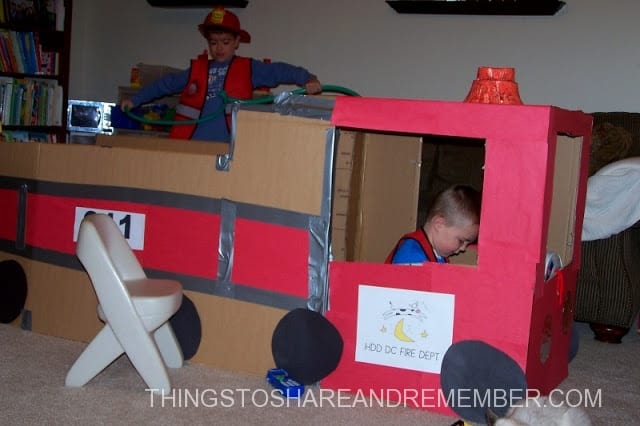 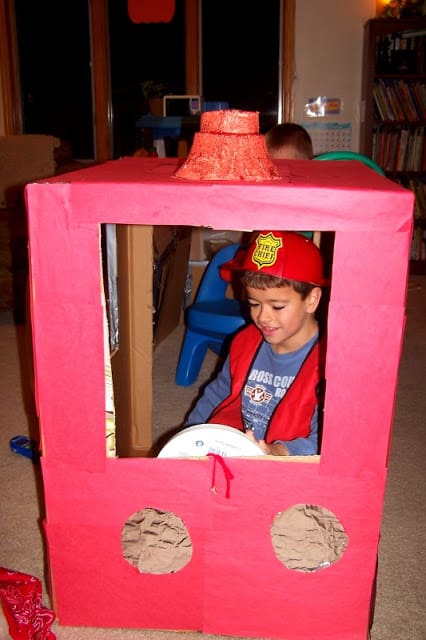 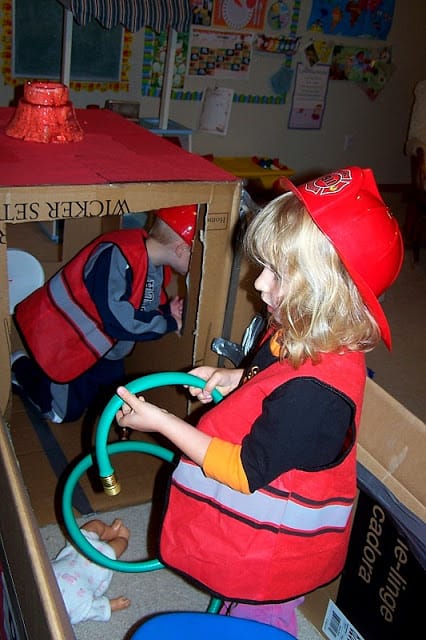 I saved  the cardboard fire truck so we could play with it again. It wasn’t as nice after I folded it up and stored it, but it did work for a while. It’s one of those things I wish I could have around all the time. It was such a great dramatic play opportunity! Inexpensive too. 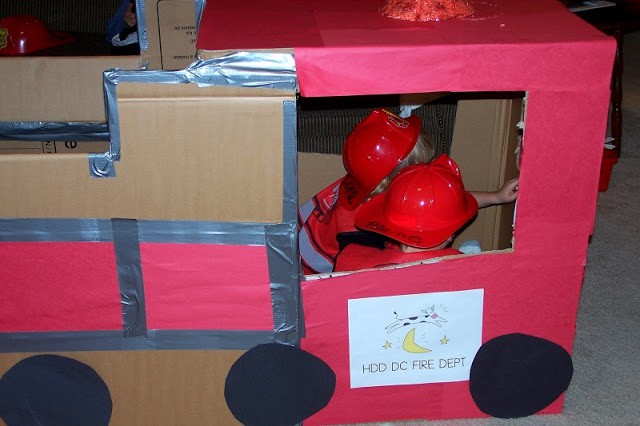 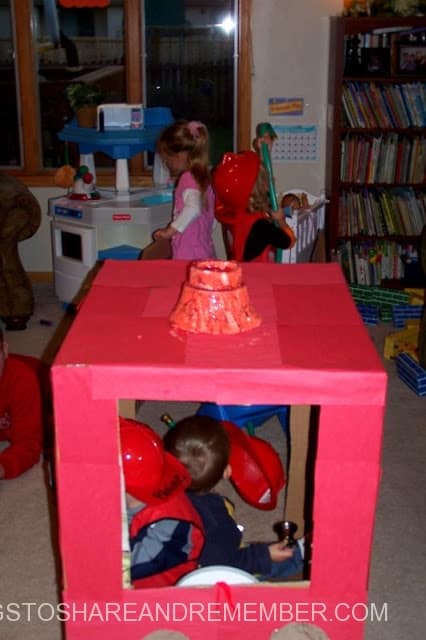 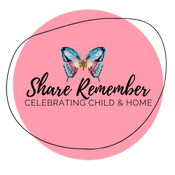 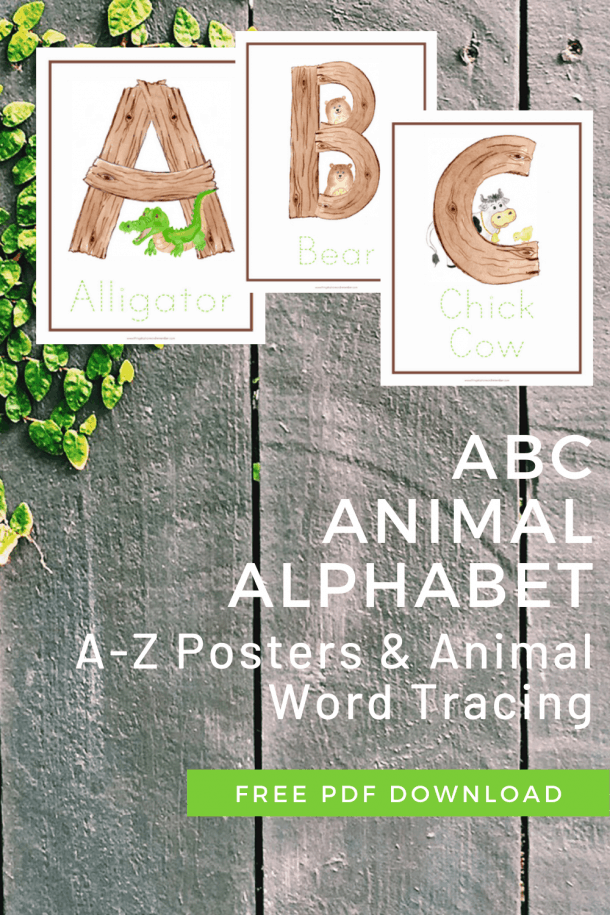